Release Day Review! Eyes of the Tiger by Patricia Rosemoor! 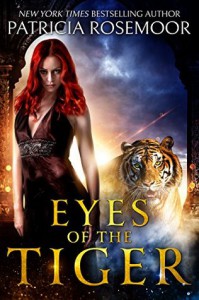 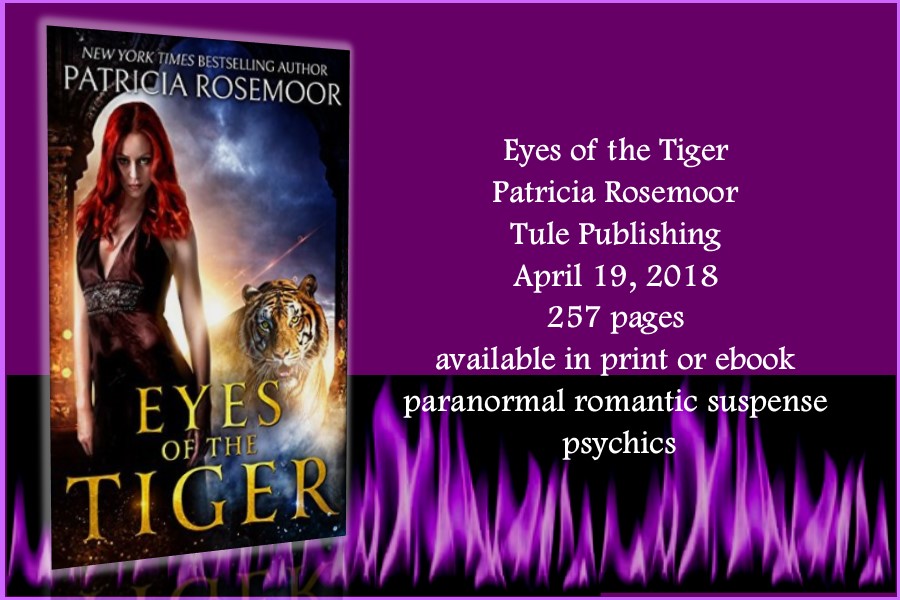 Jewelry designer Gemma Hewitt has a gift. Gems and jewelry speak to her, which inspires her designs, and also sends her on dark adventures across the globe as she seeks out historic pieces. After her mother is brutally murdered, Gemma inherits her famed jeweled collar, which she hopes will lead her to see the face of her mother’s killer and bring him to justice. Instead, she's thrown back to 1901 India where she sees the young woman about to be married with a pendant that matches her jeweled collar. When she's hired to find the entire bridal suite, she hopes she can use the jewels to save her family's fortune. Can she trust the handsome, enigmatic man who promises to help her on her quest, or is he the one she should be running from?

British reporter/photographer Raj Sinclair wants the bridal suite for his own reasons. Attracted to Gemma, he senses a connection with her as if he’s known her for a very long time. When danger stalks her, he will do anything to protect her.

The treasure hunt takes them to cities from the US to Britain to France, ending in India where the bridal suite is finally rejoined... and three reincarnated souls get another chance to make things right.

Eyes of the Tiger is chock full of suspense and intrigue as well as romance which keeps readers glued to the pages.  Gemma and Raj are strong, compelling characters that have a sizzling chemistry that heats up the pages while they struggle to with trust and emotional issues that keeps the turmoil high despite their attraction and a smoldering passion that refuses to let them ignore it. The relationship is kind of an all uphill battle between Gemma and Raj but the intriguing events that take place keeps putting them together so they can’t deny the romance.

The anticipation builds throughout the story as the danger and the intrigue continues to build with lots of twists and turns to keep the readers wondering until the very end. The author makes it all come to vivid life with well written words that paint vivid images and makes it easy for the readers to become lost in the story.

Patricia Rosemoor has a gift for using twisting fascinating tales with unique elements that grab readers attention and keep them absorbed with the mystique and romance of her captivating characters and Eyes of the Tiger certainly holds readers hostage until the very end and to me it had a quest or treasure hunt feel to the story that really pulled me along and made feel as if I was joining Gemma and Raj on their adventure.

Eyes of the Tiger is available in print or ebook at:

Patricia Rosemoor can be found at: