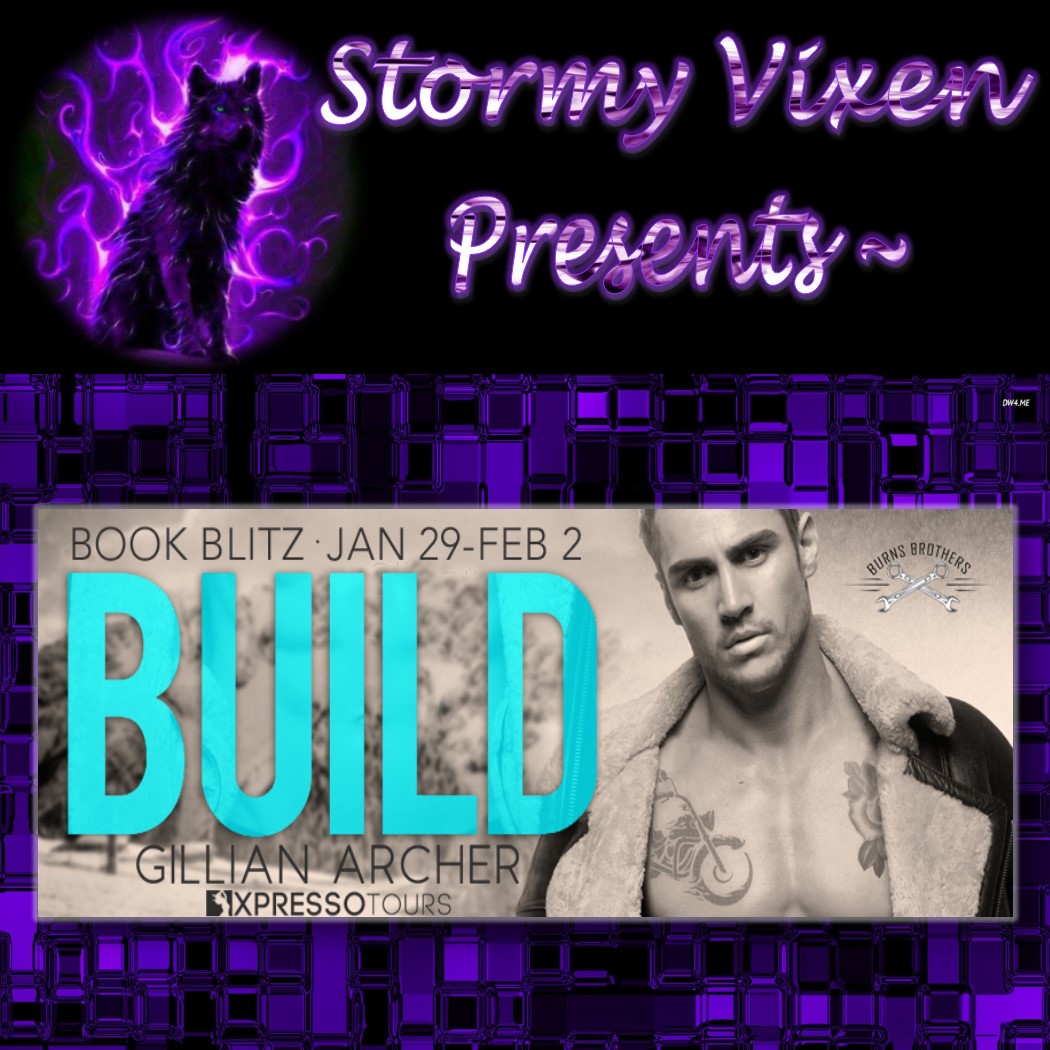 Hello, Readers! I have am going to share another contemporary romance release with you today – Build – the 1st book in the Burns Brothers series by Gillian Archer! Enjoy & don’t forget to enter the giveaway! 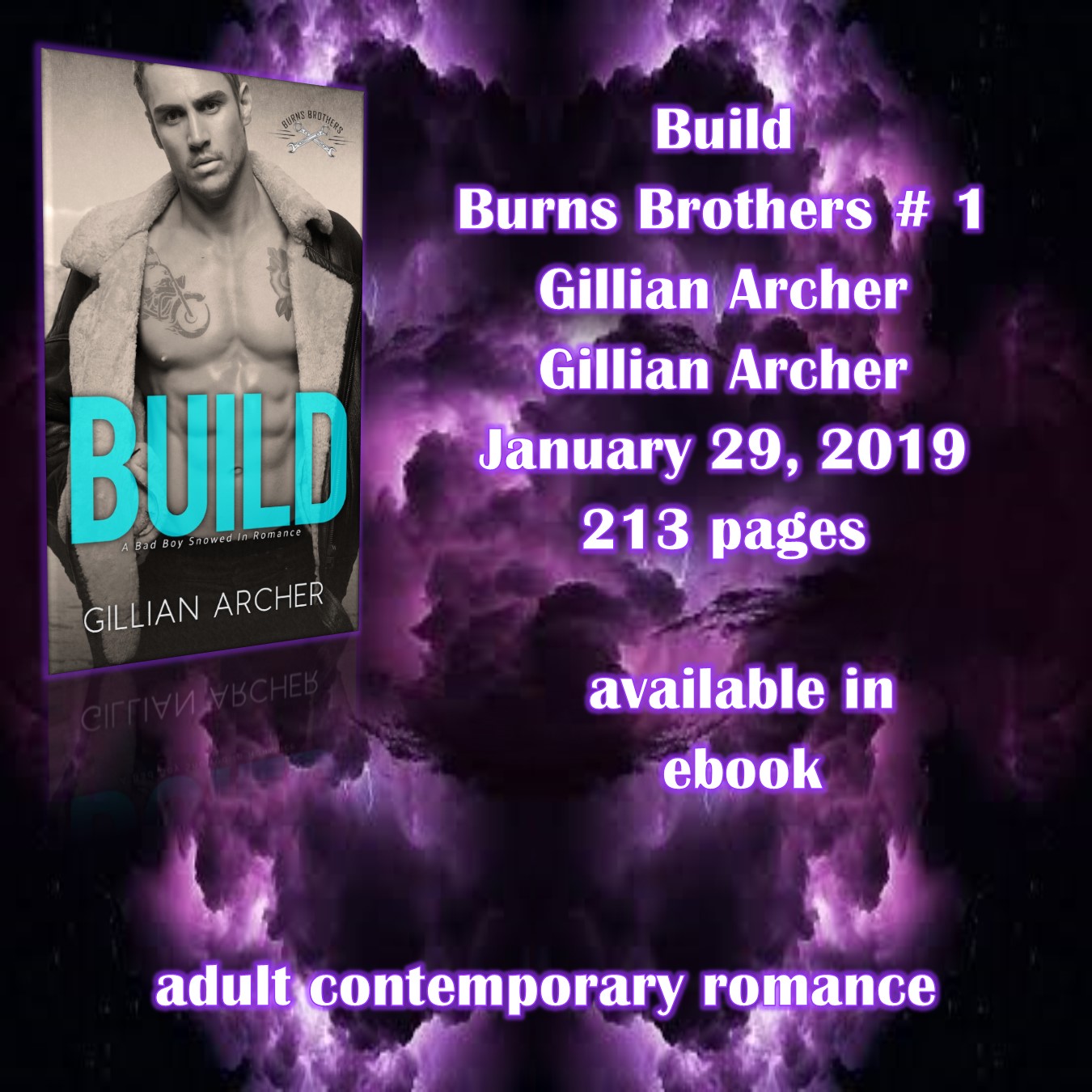 Welcome to Badass Builds where the motorcycles are as sexy as the brothers building them.

I thought she wasn’t real the first time I saw her. To be fair I was a hungover mess when I woke up and looked into her gorgeous eyes. After getting the second worst news of my life—that my father would be paroled soon—I’d escaped to my buddy’s posh cabin near Lake Tahoe. Now the maid with the gorgeous eyes is snowed in with me, and I wonder if she might be a better distraction than the mountain of booze I’d planned on drinking. She’s curvy in all the right places, and the snow is falling faster.

As a single mom, I don’t have time for men, especially irresponsible tattooed bad boys like my ex. But Austin is hot. And sexy. And stuck here in the cabin with me. I can’t say no to fling with this bad boy, especially since Austin is so gorgeous and awkwardly sweet.

One night becomes two, and I don’t know if I can risk my heart—and my little boy’s—if Austin wants it to become more when we get through the snow and back to reality. 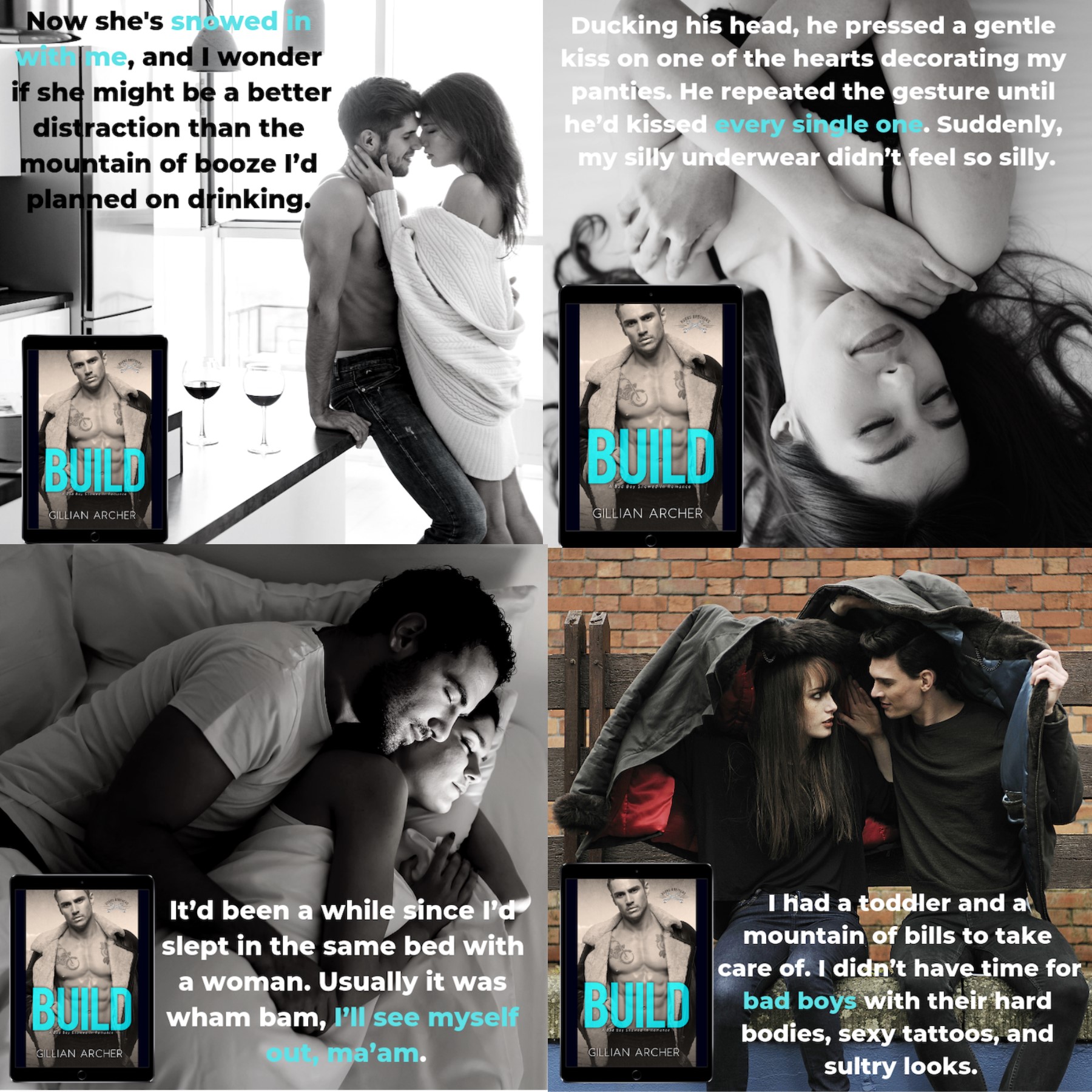 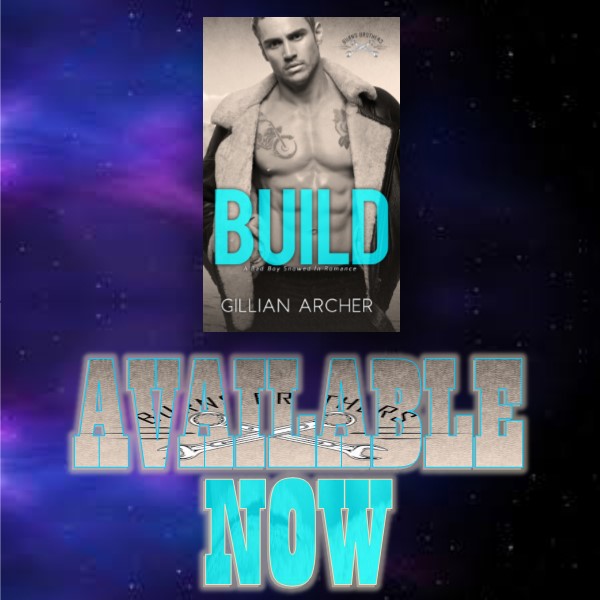 LET’S give a warm welcome to Gillian Archer! She’s here to tell us about BUILD!

HELLO, GILLIAN! Thanks for joining us today!

Thanks so much for having me. I’m thrilled to share my new release with you!

- Summary of the book (In your own words)

Alpha male gets snowed in with cleaning lady. Sexiness ensues then they have to figure out if they can have a future together when they get back to reality.

Days like today, I really wish I’d been an only child.
“You’re full of sh*t if you think the West Coast Kings are going to be happy with a paint job like that.” My younger brother by eighteen months, Nathan, growled as we stood in our workshop with all my brothers gathered around the cans for the Kings build.

*The first half (where the hero & heroine are snowed in together) takes place in Lake Tahoe, CA where I married my husband fifteen years ago.

*The Burns Brothers series was inspired by my True Brothers MC series and my late night watching of the tv show American Chopper. The Burns Brothers are just as dysfunctional but in a relatable and hopefully a redeemable way.

*Rachel’s son, Wyatt, was loosely base on my three year-old daughter and all the crazy things she says.

- If your book was optioned for a movie, what scene would you use for the audition of the main characters and why? (Please share a little snippet of the scene)

Probably the scene where the hero helps the heroine with her fear of dogs.

I flinched when Austin appeared at my side. My fight or flight instincts kicked in as I took a few steps back—away from him or the dog I didn’t know. I just wanted to fly away.

“Whoa. Hold up. It’s okay. No one here—man or dog—is gonna hurt you. If it’ll make you feel better, you can take your charger and hole up in a bedroom with the door locked or whatever. Here.” He held the cord out in his hand and the gentle, understanding look in his eyes melted me, and I started babbling.

“Oh no. You don’t have to do that. I don’t want you kicking him out. I can hang out upstairs or something.”

“It’s not exactly like I’m putting Blue out in the cold. Cole’s garage is nicer than most people’s houses. It’s nicer than the house I grew up in. Blue will be fine.”

I shook my head as I accepted the cord. “I’d still feel bad.”

Austin rocked back on his heels and stuffed his hands in his back pockets. “How deep is this fear of yours? Could you come over and meet Blue? I’ll turn on the lights and stand between you. Despite his size, he’s really a big marshmallow, I swear.”

I bit my lip in indecision. Austin was persuasive, but my fear of dogs went pretty deep. If Blue was a Pitbull, I was out of here. “What breed is he?”

“He’s a Great Dane. They’re the teddy bears of dogs, I promise.”

Austin smiled at me as he grabbed my hand. My heart stuttered for a second before it pounded hard in my chest. I’d like to attribute my sudden arrhythmia to fear, but I knew better. I just didn’t want to think about it. Nothing was going to come of this anyway—Austin still thought I had a man back home.

He flicked on the light switch with his other hand, flooding the room with light. I blinked against the glare then focused on the large dog on the floor. My whole body tensed. The dog’s head tilted as he watched me. Unlike the monster that’d mauled me as a teenager, this dog was kinda…lazy looking. Blue let out a soft sigh then fell over onto his side with a human sounding groan. My lips curled slightly, and most of the tension drained from me. He looked sweet and not threatening at all.

“See? He’s a lazy lump. Most days I’m lucky if I can get him off the couch. He’s like a big, lazy teenager but with none of the attitude. And trust me, I’d know.”

I nodded slightly, not letting Blue out of my sight. I knew Austin was the oldest of four brothers. But I didn’t say anything because I didn’t want to look like the crazy stalker I clearly was.

Austin’s rumbling voice tore me from my thoughts. “Are you okay with getting closer to him? Blue won’t mind.”

“I, uh, okay,” I mumbled. Blue looked sweet enough, but I was still too nervous to trust he was a teddy bear. He still looked very doglike to me.

“I got Blue two years ago. When he was a puppy, he was the size of most medium adult dogs. But he was as lazy as ever, even as a puppy.” Austin chattered away as we approached the dog in question. Blue blinked languidly at us but didn’t get up, or even lift his head. A low thumping sound pulsed in the silent room as Blue’s tail wagged, walloping away at the floor. “He’s lazy; he won’t get up even when he’s excited.”

My smile grew as I watched Austin kneel down next to the prone dog. He rubbed Blue on his ribs, but still the dog didn’t really move—aside from his tail, which continued to thump against the floor. “Who’s a good boy? Who’s a good boy?”

The baby talk was ridiculously sweet and totally at odds with his professional persona. With the tattoos and muscles and overall badass aura, it made my ovaries flutter to watch Austin caress and sweet talk his dog. And it totally distracted me from my fear, right up to the point that Austin grabbed my hand again.

“You okay with giving him a little pat? I’ll keep myself between you two for your peace of mind, but you’ve got nothing to worry about. He let my brothers lay on top of him.”

My heartbeat thrummed in my ears from the combination of my fear and Austin’s touch. But that sweet, soft look in his eye had me grinning, and before I even realized it, words were coming out of my mouth. “I, uh, yeah sure. That’s okay.”

Austin guided my hand toward Blue’s blue-grey coat. The dog didn’t flinch as our entwined hands moved over him. His fur was soft and kinda bristly. And warm. After a minute Blue groaned again and rolled onto his back, leaving his soft fleshy belly exposed.

“He really loves belly rubs. Here.” Austin moved our hands over Blue’s belly which felt surprisingly like my own skin—soft, hairless, and with that give of a not really firm tummy.

I laughed as I petted him. Austin smiled and looked into my eyes as our hands continued to move over Blue.

“See? Nothing to worry about. Blue’s just a big ol’ baby. Not a scary bone in his body.” Austin’s fingers linked with mine for a second.

I looked down at our joined hands and felt a tingle between my legs. It’d been so, so long since I’d been near a guy I kinda liked, let alone touched one. But I knew no matter how I felt, nothing would ever come of it. I had a son at home, a mom to take care of, and besides, I doubted he had the same jolt that I’d felt just because our hands had touched. He still thought I was married.

You could fix that, a naughty little voice whispered in my head. But I couldn’t think of a way to bring it up that didn’t sound like a come-on. I didn’t want to look like a needy hussy, especially if he wasn’t into me. How embarrassing would that be, if I all but threw myself at him and he rejected me? Meanwhile, we had to spend however much time together. Alone.

- What do you want people to take away from reading this book?

That family has so many different definitions. And everyone deserves their own HEA!

- What are you currently working on? What other releases so you have planned for 2019?

I should have book 2 of the Burns Brothers series, FAST, (aka Ryan’s story) available in the summer and maybe book 3 (Dylan’s story) by the end of the year!

What’s your stance on snow? Love it? Hate it? Wish it would go away already? (That last one might be mine….) Let me know in the comments! Gillian has a bachelor’s degree in mining engineering but prefers to spend her time on happily ever after. She writes the kind of stories she loves to read—the hotter the better!

When Gillian’s not pounding away on the keyboard, she can be found surfing the couch indulging in her latest reality tv fixation, baking something ridiculously tasty (and horrible for her waist line) or snuggling with her husband.

Home is currently in the wilds of Nevada with her amazing husband, ridiculously cute kiddo, and goofy dog.